The Catalan Numbers from Their Generating Function

is a classic exercise in generating function manipulation, although the details are sometimes omitted in textbooks (and on the Wikipedia page).  This post fills in the details.

The Catalan numbers are the solution to many combinatorial problems.  See, for example, this selection from Vol. II, Chapter 6, of Stanley’s Enumerative Combinatorics [1], as well as the Catalan addendum, for many such combinatorial interpretations.  My favorite is that

is the number of lattice paths from (0,0) to

that do not go above the diagonal

to be the generating function for the Calatan numbers; i.e.,

To derive a closed-form for

from the recurrence, start by multiplying both sides of the Catalan recurrence by 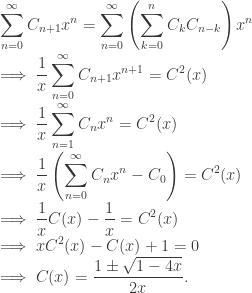 Now, do we want the positive or the negative square root?  We know that

, so the generating function satisfies

.  Subbing in 0 for either form of

gives division by zero.  However,

is the indeterminate form

for the negative square root, so let’s take a closer look at this limit.  (The same limit evaluates to

for the positive square root, so that cannot be the right choice.)

Applying l’Hôpital’s rule, we have

The negative square root does evaluate to the correct number, so that one must be the right choice for

Applying Newton’s generalized binomial series, we then have

in the summand simplifies to 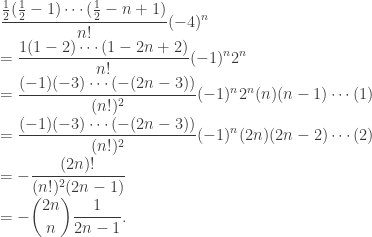 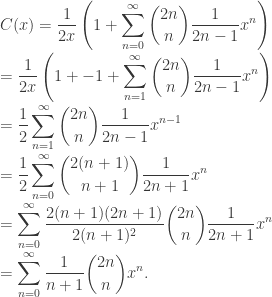 in the generating function

This entry was posted in Catalan numbers, combinatorics. Bookmark the permalink.

9 Responses to The Catalan Numbers from Their Generating Function