Finding the Area of an Irregular Polygon

Finding the area of an irregular polygon via geometry can be a bit of a chore, as the process depends heavily on the shape of the polygon.  It turns out, however, that there’s a formula that can give you the area of any polygon as long as you know the polygon’s vertices.  That formula is based on Green’s Theorem.

Green’s Theorem is a powerful tool in vector analysis that shows how to convert from a line integral around a closed curve to a double integral over the region enclosed by the curve and vice versa.  More specifically, the circulation-curl form of Green’s Theorem states that, if D is a closed region with boundary curve C and C is oriented counterclockwise, then

Since the double integral here gives the area of region D, this equation says that we can find the area of D by evaluating the line integral of

counterclockwise around the curve C.  The boundary curve for a polygon consists of a finite set of line segments, though, and so to obtain our formula we just need to find out what

to another generic point

We need a parameterization of L.  That requires a point on the line segment L and a vector in the direction of L.  The starting point

from the starting point to the ending point work well, giving us the parameterization

.  This gives us the integral 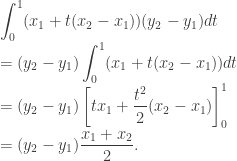 In other words, the line integral of

the difference in the y coordinates times the average of the x coordinates.

Let’s put all this together to get our formula.  Suppose we have a polygon D with n vertices. Start with any vertex.  Label it

.  Then move counterclockwise around the polygon D, labeling successive vertices

, and so forth, until you label the last vertex

.  Finally, give the starting vertex a second label of

In words, this means that to find the area of polygon D you can just take the difference of the y coordinates times the average of the x coordinates of the endpoints of each line segment making up the polygon and then add up.

This formula isn’t the only such formula for finding the area of a polygon.  In fact, a more common formula that can also be proved with Green’s Theorem is

This second formula looks a little nicer to the eye, but I prefer the first formula for calculations by hand.

This entry was posted in analytic geometry, calculus, Green's Theorem. Bookmark the permalink.

1 Response to Finding the Area of an Irregular Polygon